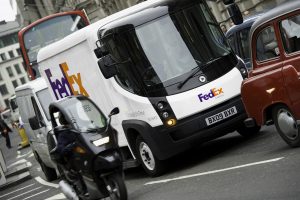 Report Showcases How FedEx Multiplies Opportunities Around the World

MEMPHIS, Tenn., April 18, 2019 — FedEx Corp. (NYSE: FDX) announced today the online release of its 2019 Global Citizenship Report (GCR), which details how the company connects the world responsibly and resourcefully.  The 11th annual report includes updates on the progress of the company’s citizenship goals in FY18, which ended on May 31, 2018, and focuses on the company’s corporate social responsibility strategies in three key areas: Company (Economy), People, and the Environment.

FedEx multiplies opportunities using our vast network reaching more than 99 percent of the world’s GDP, while creating growth for customers, greater potential for our people and efficiencies for the environment.

“Our reputation is built on the ability to connect people and possibilities,” said Mitch Jackson, chief sustainability officer, FedEx Corp.  “We constantly strive to be a better corporate citizen while setting the standard for what it means to deliver positive impact for our team members, customers and communities around the world.”

Highlights from this year’s report include:

In FY18, FedEx exceeded $65 billion in revenues, a 9 percent increase over FY17, and climbed to number 50 on the Fortune 500 list of U.S. companies.  This success has enabled the company to continue driving growth and lifting economies where we operate.  FedEx created income and opportunities for stakeholders including:

FedEx also expanded the company’s retail networks to give customers more options to pick-up, ship or have packages held, including at 5,000 locations across Hong Kong and Taiwan.  In the U.S., 80 percent of the population is within five miles of a FedEx hold location.

Corporate social responsibility is at the heart of the connections FedEx makes around the world.  Key elements of the company’s strategy include environmental efficiency innovations, a sustainable supply chain, a diverse and inclusive workplace, and the robust giving and volunteering platform known as FedEx Cares.

There would be no FedEx without the efforts of the company’s 450,000 team members around the world, which is why the company strives to provide team members with a safe, inclusive work environment.  In FY18 the company:

FedEx recently announced a partnership between FedEx Express and The University of Memphis that will allow the 11,000+ employees of the Memphis World Hub the chance to

earn a tuition-free, fully-online degree.  Additionally, the company has expanded access to that program to employees at other major FedEx Express hubs in the U.S., including Indianapolis, Oakland, Los Angeles and Newark.

FedEx has made great strides in reducing its carbon emissions intensity through the company’s Reduce, Replace, Revolutionize strategy.  The strategy focuses on reducing impacts and improving productivity while creating new, more efficient and innovative solutions.  Overall, these efforts have contributed to a 37 percent reduction in CO2 emissions intensity on a revenue basis across the enterprise since FY09, a period in which revenue grew by 84 percent. FedEx avoided more than 2.7 million metric tons of CO2e from fuel and energy saving initiatives last fiscal year alone.

In FY19, FedEx also announced it will be adding 1,000 Chanje V8100 electric vehicles to the FedEx Express fleet in California.  The EVs can travel more than 150 miles when fully charged and have the potential to help FedEx save 2,000 gallons of fuel while avoiding 20 tons of emissions per vehicle each year.  In addition, FedEx added 445 electric vehicles in FY18, bringing the total number of EVs to more than 2,554.

The company’s goal to obtain 30 percent of jet fuel from alternative fuels by 2030 reached a milestone.  Red Rock Biofuels, which will supply low-carbon, renewable jet fuel to FedEx Express, broke ground on its bio refinery in Lakeview, Oregon in July 2018.  The first delivery of alternative jet fuel is anticipated in 2020.  Also in FY18, the ecoDemonstrator, a Boeing 777F built for FedEx Express, became the first FedEx plane to fly 100 percent on biofuel during a short-term period that also tested and gathered data on 35 new technologies.